The New York Times–bestselling author of Black Hawk Down delivers a “suspenseful and inspiring” account of the Iranian hostage crisis of 1979 (The Wall Street Journal). On November 4, 1979, a group of radical Islamist students, inspired by the revolutionary Iranian leader Ayatollah Khomeini, stormed the U.S. embassy in Tehran. They took fifty-two Americans captive, and kept nearly all of them hostage for 444 days. In Guests of the Ayatollah, Mark Bowden tells this sweeping story through the eyes of the hostages, the soldiers in a new special forces unit sent to free them, their radical, naïve captors, and the diplomats working to end the crisis. Bowden takes us inside the hostages’ cells and inside the Oval Office for meetings with President Carter and his exhausted team. We travel to international capitals where shadowy figures held clandestine negotiations, and to the deserts of Iran, where a courageous, desperate attempt to rescue the hostages exploded into tragic failure. Bowden dedicated five years to this research, including numerous trips to Iran and countless interviews with those involved on both sides. Guests of the Ayatollah is a detailed, brilliantly recreated, and suspenseful account of a crisis that gripped and ultimately changed the world. “The passions of the moment still reverberate . . . you can feel them on every page.” —Time “A complex story full of cruelty, heroism, foolishness and tragic misunderstandings.” —Pittsburgh Post-Gazette “Essential reading . . . A.” —Entertainment Weekly 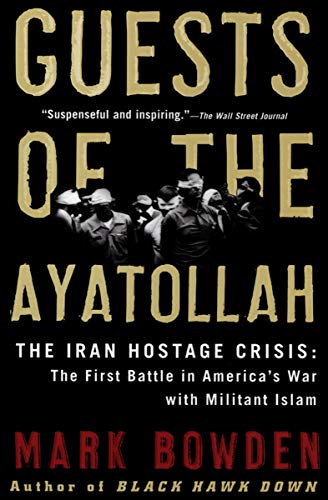 How Old Is The Ayatollah

Guests Of The Ayatollah

What if the Islamic State captured the most valuable hostage in history? “The president of the United States . . . is missing.” With these words, New York Times journalist J. B. Collins, report-ing from the scene of a devastating attack by ISIS terrorists in Amman, Jordan, puts the entire world on high alert. The leaders of Israel and Palestine are critically injured, Jordan’s king is fighting for his life, and the U.S. president is missing and presumed captured. As the U.S. government faces a constitutional crisis and Jordan battles for its very existence, Collins must do his best to keep the world informed while working to convince the FBI that his stories are not responsible for the terror attack on the Jordanian capital. And ISIS still has chemical weapons . . . Struggling to clear his name, Collins and the Secret Service try frantically to locate and res-cue the leader of the free world before ISIS’s threats become a catastrophic reality.